The head of the city government in Riga is the mayor. Incumbent mayor Nils Ušakovs, who is a member of the Harmony party, took office on 1 July 2009.

The history of Riga, the capital of Latvia, begins as early as the 2nd century with a settlement, the Duna urbs, at a natural harbor not far upriver from the mouth of the Daugava River. Later settled by Livs and Kurs, it was already an established trade center in the early Middle Ages along the Dvina-Dnieper trade route to Byzantium. Christianity had come to Latvia as early as the 9th century, but it was the arrival of the Crusades at the end of the 12th century which brought the Germans and forcible conversion to Christianity; the German hegemony instituted over the Baltics lasted until independence—and is still preserved today in Riga’s Jugendstil (German Art Nouveau) architecture.

From the 13th century to the birth of nationalism in the 19th and independence in the 20th, Latvia’s and Riga’s history are intertwined, a chronicle of the rise and fall of surrounding foreign powers over the Latvians and their territory. As a member of the Hanseatic League, Riga’s prosperity grew throughout the 13th-15th centuries—with Riga to become a major center of commerce and later, industry, of whatever empire it found itself subject of.

Today, Riga and its environs are home to close to half of Latvia’s inhabitants.

UNESCO has declared Riga’s historical center a World Heritage site in recognition of its Art Nouveau architecture, widely considered the greatest collection in Europe, and for its 19th-century buildings in wood.

Riga’s administrative divisions consist of six administrative entities: Central, Kurzeme and Northern Districts and the Latgale, Vidzeme and Zemgale Suburbs. Three entities were established on 1 September 1941, and the other three were established in October 1969. There are no official lower level administrative units, but the Riga City Council Development Agency is working on a plan, which officially makes Riga consist of 58 neighbourhoods. The current names were confirmed on 28 December 1990.

The climate of Riga is humid continental (Köppen Dfb). The coldest months are January and February, when the average temperature is −5 °C (23 °F) but temperatures as low as −20 to −25 °C (−4 to −13 °F) can be observed almost every year on the coldest days. The proximity of the sea causes frequent autumn rains and fogs. Continuous snow cover may last eighty days. The summers in Riga are warm and humid with the average temperature of 18 °C (64 °F), while the temperature on the hottest days can exceed 30 °C (86 °F).

Riga is one of the key economic and financial centres of the Baltic States. Roughly half of all the jobs in Latvia are in Riga and the city generates more than 50% of Latvia’s GDP as well as around half of Latvia’s exports. The biggest exporters are in wood products, IT, food and beverage manufacturing, pharmaceuticals, transport and metallurgy. Riga Port is one of the largest in the Baltics. It handled a record 34 million tons of cargo in 2011 and has potential for future growth with new port developments on Krievu Sala. Tourism is also a large industry in Riga and after a slowdown during the recent global economic recessions, grew 22% in 2011 alone.

The number of residents бwho have declared their residence in Riga is reducing, reports LETA, according to the Office of Citizenship and Migration Affairs.

In the period until 2013, the population of the capital was reduced by an average of 4,500 per year.

Although it is commonly believed that the increasing population of Riga in 2013 and 2014 was due to the Riga City Council’s social policy measures, for instance, introduction of the so-called “Rigan’s card” that entitled the holder for cheaper public transport fares, Riga Mayor Nils Usakovs denies this and explains that the reducing population of Riga is in line with the general trends observed in Latvia and elsewhere in Europe.

The official language of Latvia is Latvian; however, in Riga, the majority of the population speaks both Latvian and Russian. English is widely spoken by younger people and by people in the tourism industry. German is also commonly spoken by tour guides.

Since January 1st, 2014, the official currency of Latvia is the Euro. The price levels in Latvia for many groups, including restaurant and hotel services, are lower than the average for European countries, though price levels may vary in the capital and regions of Latvia

The Southern Bridge was the biggest construction project in the Baltic states in 20 years, and its purpose was to reduce traffic congestion in the city centre. Another major construction project is the planned Riga Northern Transport Corridor; its first segment detailed project was completed in 2015.

Riga has one active airport that serves commercial airlines—the Riga International Airport (RIX), built in 1973. Renovation and modernization of the airport was completed in 2001, coinciding with the 800th anniversary of the city. In 2006, a new terminal extension was opened. Extension of the runway was completed in October 2008, and the airport is now able to accommodate large aircraft such as the Airbus A340, Boeing 747, 757, 767 and 777. Another terminal extension is under construction as of 2014. The annual number of passengers has grown from 310,000 in 1993 to 4.7 million in 2014, making Riga International Airport the largest in the Baltic States.

The former international airport of Riga, Spilve Airport, located 5 km (3.11 mi) from Riga city centre, is currently used for small aircraft, pilot training and recreational aviation. Riga was also home to a military air base during the Cold War — Rumbula Air Base.

Public transportation in the city is provided by Rīgas Satiksme which operates a large number of trams, buses and trolleybuses on an extensive network of routes across the city. In addition, many private owners operate minibus services. 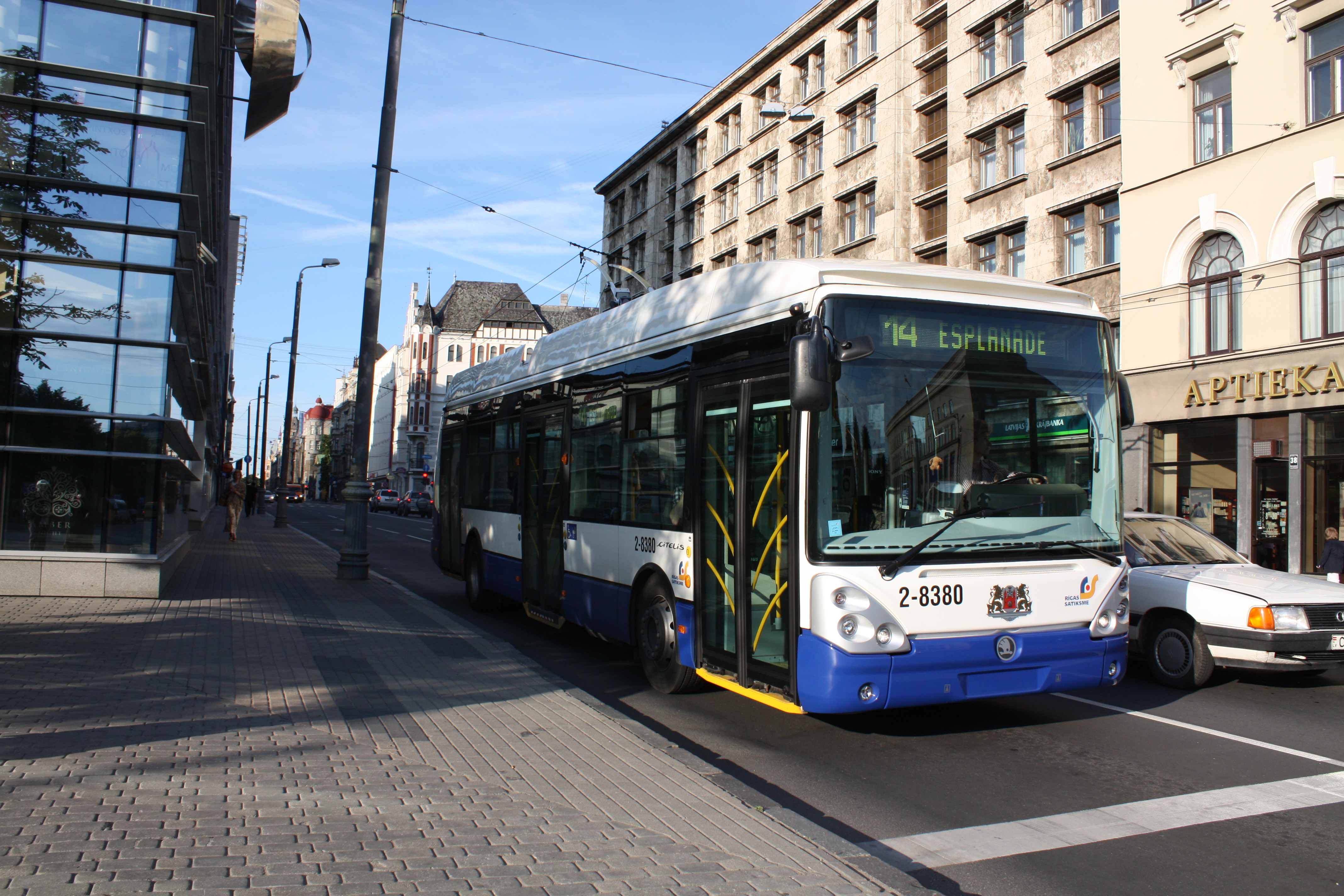 One of the several Trolleybus types in Riga

Riga is connected to the rest of Latvia by trains operated by the national carrier Passenger Train, whose headquarters are in Riga. There are also international rail services to Russia and Belarus, and plans to revive passenger rail traffic with Estonia. A TEN-T project called Rail Baltica envisages building a high-speed railway line via Riga connecting Tallinn to Warsaw using standard gauge, expected to be put into operation in 2024.